Capital City Minstrels toured through Germany, Switzerland and Hungary over two weeks in June 2015 and as expected, it was as fun, as exciting, as inspiring and as strenuous as we expected! Through various host choirs in these countries, we were invited to sing at a range of venues from concert halls to cathedrals and the Indian Embassy in Berlin. As we are a gregarious bunch and are a choir of course, we quite literally sang our way through Europe – performing a scheduled 8 concerts over the two weeks, but also several impromptu renditions of what became our anthem for this trip – “Can’t help falling in love”. And we couldn’t. We really couldn’t help falling in love with the places, the people who hosted us, the venues we sang at, and even the “party” bus that became home to us as we drove from city to city.

As with any group on a prolonged period of travel,  things did go wrong as well.  Like when our lovely Usha stole away to the restroom after we finished our first performance at the Gyor Cathedral near Budapest. As we were all excited after a successful first concert and readied ourselves for an afternoon of sightseeing around Gyor and the Pannenhalma Monastery, it slipped our attention to do a full head count and we were soon on the bus speeding away towards Pallenhalma. Till a call from Usha on one of our cell phones alerted us to the fact that she was missing! Further investigation revealed that she had come back from the loo to find an empty changing room, an empty cathedral and she had been locked in as the church officials had assumed we had all filed out in entirety! Much reorganizing ensued, a taxi was hailed and Usha rejoined the group where she was promised to never be overlooked again and a more robust checking system was put in place as part of our learning. We got so used to hearing “All sopranos, raise your hands”, “All altos raise your hands” and an “Usha are you here?” thrown in for good measure!

But I think the main thing that came out of this trip was the bonding and listening to each other, we definitely became closer as a group and as a choir. One of our members, Martina, was in an unfortunate accident just a day before we left India. She was determined to not let down the group and wanted to be a part of the trip. With a fractured leg and long journeys ahead of us, the group came together to ensure she was as comfortable as possible and help her get from place to place. From bicycles and food trolleys, to two of our finest men carrying her, several makeshift arrangements were made to transport her around until we could arrange a wheelchair and crutches for her later on in the trip. Sore throats, fevers and exhaustion cropped up frequently and everyone helped with ayurvedic remedies, “medicinal alcoholic concoctions”, encouraging words and always a ready joke to cheer everyone up.

We were hosted by some really terrific choirs – from the Diplomatic Choir of Berlin, to Carolin’s old choir in her hometown, Geretstried – Mixed Voices, and the absolutely delightful all-male choir, Le Beau Soleil, in Switzerland. We learned so much from them, their style as a group, their song choices, their rehearsal schedules and so much more. They in turn, and the audiences in all these countries, got a great understanding of what the Capital City Minstrels is as a choir – our song choices, singing style and outfits representing the diversity, enthusiasm, colour and passion we bring to the music we sing. The steady and increasing rhythm of applause at the end of our performances, signifying the audience’s appreciation and their call for an encore, and standing ovations through our tour was overwhelming. It was inspiring to see how powerful music is – many of the audience didn’t speak any of the languages we were singing in, nor had they heard some of the unfamiliar rhythms and instruments accompanying us, but that didn’t stop them from swaying and clapping in appreciation, and thanking us at the end for performing for them!

Perhaps one of the most significant memories for me from this trip was just how a destination can be experienced so differently, depending on your purpose of travel. Several of us had been to Europe before, on work or leisure, but this was different.  Singing our way through these places just brought to life a completely new way of seeing them. Cathedrals tend to be awe inspiring with their lofty ceilings, rich interiors and beautiful stain glass windows. As a visitor you may walk around, read about the history of the building and sit quietly in the pews, savouring the peace and beauty around you. But to perform at these places, where our voices carried through the building, rounding out our sound and just filling each nook and corner with music, the acoustics and ambience brought tears to many of our eyes and a feeling of indescribable wonder. Singing in town squares or on a cruise on the Danube or in the interiors of the lovely Chateau de Chillon along the banks of Lake Geneve (brought a tear to our tour guide’s eye!) drew appreciation (as well as some annoyed looks) and a friendly and warm vibe from the people around, drawing not just us, but all of them out of our individual shells. We made friends, sang with lots of people, ate some amazing food and had a memorable trip. Singing one’s way through Europe is definitely recommended!

About the Capital City Minstrels – 21 years of choral music 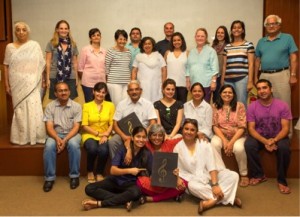 From just a small group of eight singers, CCM has grown to be a large diverse singing group of more than 60 members. CCM first came together under Mrs. Zohra Shaw, the founder and first conductor, in 1994, meeting in each other’s homes, in those early years. From the late 1990s, the Hungarian Cultural Centre has been their ‘singing home’ where they meet to practise. Over the years, the Choir has been led by several conductors of different nationalities. Each has enriched the Choir’s musical experiences, with their knowledge, musical styles and dedication. The choir originally sang primarily Western classical music, but with different conductors and influences the group now celebrates a variety of choral music from classical to contemporary, from Indian choral compositions to Hungarian folk music, from gospel to rock and pop.

Zohra Shaw, the founder of the Capital City Minstrels Choir and its first Conductor is a Fellow of the Trinity College of Music, London.  She has conducted several choirs in India and abroad. Among the great works performed by CCM under her direction, are the Schubert Masses in G & C, Puccini’s Messa di Gloria & Faure’s Requiem. Mrs. Shaw has played a big part in moulding individual voices to form a harmonious choral whole. She has given the Choir its unique identity. Mrs. Shaw moved to Boston to be with her family in 2000 and visits India from time to time.

Over the years, CCM members have come from across India and other countries, with some moving on when their tenure was done. The composition of CCM reflects a truly unique blend of singers from around the globe, many of whom have stayed connected with each other. Lifelong friendships have been formed and a special bond – a passion for singing and performing together – connects each and everyone who has been with the Choir. Over the years, CCM has performed over 200 times in India and abroad. The choir has participated in choral festivals like the Monte Festival in Goa, performed Peace Concerts in Srinagar and Gulmarg as guests of the Chief Minister of Jammu and Kashmir and brought music to students of The Doon School and Lawrence School, Sanawar.

CCM has toured Europe and performed choral music in Hungary, France, Germany and Switzerland. In the recent past, CCM has also sung for the President of India and occasions like Women’s Day, for the Ministry of External Affairs. One of the Choir’s long term goals is to increase musical literacy by exposing children to choral music.

Carolin Remy was born into a very musical family and learnt to play the piano and to sing when she was very young. She trained to be a Primary School Music Teacher at Eichstätt, Germany. Her professional education and undying passion for music led to her conducting several children’s choirs in Germany. In 1999, Carolin became a certified choir director for non-professional choirs. Carolin came to Delhi ten years ago and has been teaching at the German School, New Delhi, ever since. She conducts the German School’s children`s choir. In January 2012, she took up the conductor’s baton of the Capital City Minstrels, after having been a member of the choir.