Students as well as teachers can be confused by the variety of ways Beethoven indicated when he wanted one or more of the pedals used. This is because he had a wider variety of pedals available to him and there wasn’t yet a standard notation used by all composers. In addition the construction of pianos changed drastically during Beethoven’s lifetime, partly due to demands he himself made from piano builders.

The most significant change that happened in the middle of Beethoven’s life was the actual invention of pedals, meaning something operated with the foot. Earlier pianos had a mechanism that performed the same function as our current sustaining pedal, lifting the dampers off the strings. This mechanism was located right under the case of the piano and was operated by the player lifting a knee. Mozart’s piano had this particular method for lifting the dampers.

There was no established way to indicate to performers when they should employ this knee lever, so Beethoven had to invent his own directions. The practice at the time was to write all indications in Italian, which was not Beethoven’s first or even second language. At the beginning of the Moonlight Sonata he wrote “Si deve suonare tutto questo pezzo delicatissimamente e senza sordino.” “This whole piece should be played as delicately as possible and without mute.” The word “sordino” is usually translated as “mute,” singular. Beethoven apparently thought using this word would let us know he wanted us to lift all the dampers off the strings for the entire movement. He reiterated the instruction “senza sordino” between the staves, making doubly certain we saw his intention. This is essential for creating the revolutionary effect of the opening movement of this piece, written in 1801, when knee levers were still in use.

The piano of this time was also equipped with a mechanism that slid a piece of soft felt between the hammers and the strings, creating a magical, hushed sound that Beethoven most likely requested for this piece when he wrote “delicatissimamante,” as well as “sempre pp.”

These two mechanisms are clearly shown and heard in this illuminating video: 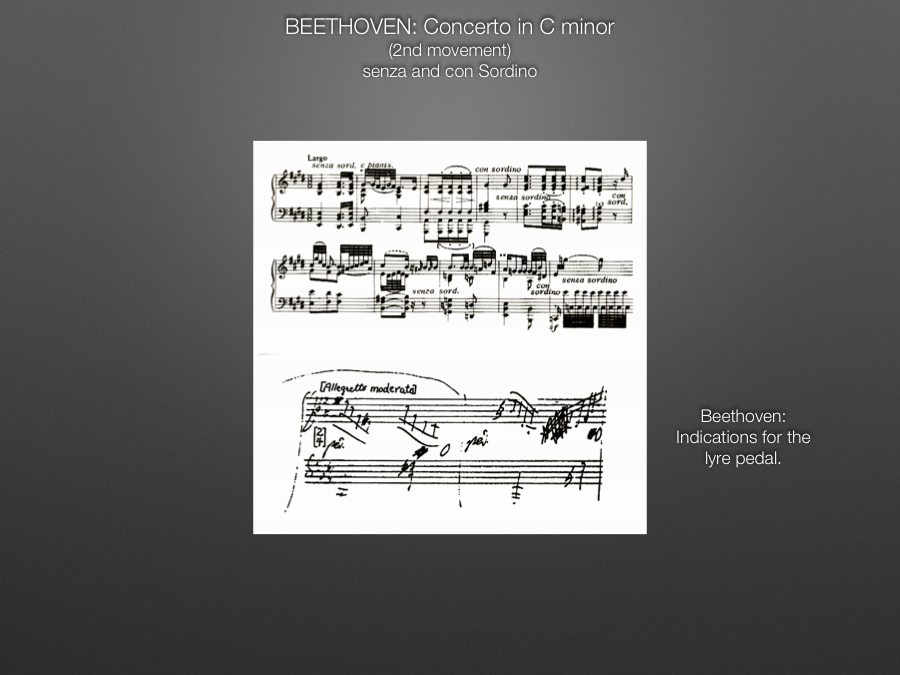 A few months later Beethoven received his first piano that included foot pedals – a French-made Erard that inspired the great sonatas of his middle period, including the Waldstein and Appassionata. Immediately in the Opus 31 Sonatas of 1801/2 Beethoven wrote the familiar “Ped.” sign that we all recognize, followed by an empty circle in his manuscript (seen above), or the asterisk in the printed score, to release the pedal. He continued to employ these signs for the rest of his life, often requesting that the pedal be left down for very long periods, notably in the first movement of the Sonata Opus 31, No. 2 as well as in the final movement of the Opus 53 Waldstein Sonata. These very long pedals can be challenging to execute on a modern piano. The amount of sound and the balance between the different registers make them come out differently than what Beethoven would have heard. Each performer has to make a decision about whether to observe these long pedals or to change more frequently than indicated. If careful attention is paid to voicing there can be successful performances of the long pedals on modern instruments.

There was one other method Beethoven used for requesting the sustaining pedal be used which will be addressed in a future article on the portato touch. This method was used by numerous composers so they will all be discussed together.