BARRY DOUGLAS – THE RETURN OF A PIANO TITAN

It is not every day that we get to hear a piano giant who is a legend in his own lifetime. Born in 1960 to Irish parents in Belfast, Douglas studied piano at the Royal College of Music, London with a teacher whose lineage dates back to Liszt’s Weimar pupils. He secured the gold medal in the Tchaikovsky competition in Moscow at the age of 25.

Barry Douglas, in this excerpt from his semi-final performance in the 1986 Tchaikovsky Competition

The Tchaikovsky competition was established by the former premier of the Soviet Union Nikita Khrushchev. The year of its establishment led to a notorious victory by young American pianist Van Cliburn. There are prizes awarded in categories piano, violin, cello, and voice held four-yearly in Moscow. The last competition in 2015 was won in a landslide victory by a totally unknown young Frenchman – 24 year old Lukas Debargue who took to the piano seriously at the age of 20. Since Van Cliburn’s victory the winners include such stellar names like John Ogdon, Vladimir Ashkenazy, John Lill, Grigory Sokolov, Mikhail Pletnev, Denis Matsuev and Daniil Trifonov. 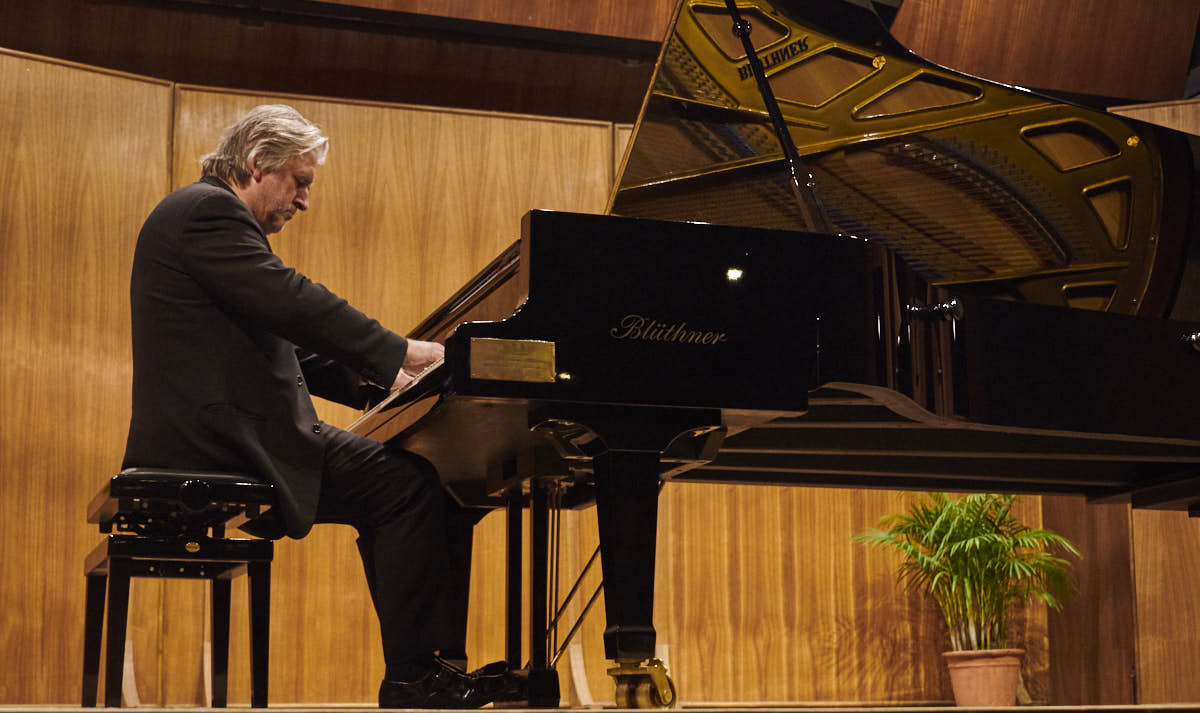 Barry Douglas first visited India some four years ago playing Tchaikovsky’s first piano concerto with the SOI and a solo recital in Mumbai. This time he was touring with his own chamber orchestra – Camerata Ireland – to perform all five of Beethoven’s piano concertos. But first to his solo recital in Pune on 21stApril. The programme consisted of two massive Russian works by Romantic composers one of which was Mussorgsky’s warhorse “Pictures” and the less familiar but equally demanding cycle The Seasons which started the programme. The Tchaikovsky though rarely heard as a piano cycle, is often heard with some movements orchestrated by various composers, is by and large lyrical and very engaging and when played like this infinitely interesting. One is grateful for the chance to hear the whole piano cycle as conceived by the composer. January (By the Hearth) in A major was a little rushed and more Allegro than Moderato but the superior technique was always in the service of the music with the three parts clearly delineated and the filigree finger-work sparkling and warm controlled legato chords. February (The Carnival) conjured up images of merry-making and celebrations with the central L’istesso tempo displaying a nice contrasting mood although brief, before returning to the D major section ending the piece on a high note. By the time Douglas got to the restful June movement (a lilting Barcarolle) there was more light and shade and a genuine singing line. There was much showy virtuosity in the Hunt (September) and the work ended with a charming waltz for December subtitled Christmas.

After the interval was Mussorgsky’s Pictures at an Exhibition his best known piano work. When played like Mr. Douglas did that night, I for one did not miss the orchestrated versions at all. The scale was breathtaking in conception and solid tonal support with a vast array of touch put entirely to the service of the music resulted in a tour de force. A memorable concert indelible in my memory was a marvellous opportunity for the music loving community in Pune. Kudos to the Pune Music Society for securing this magnificent artist!