Built in 1718, the Neo-Gothic, Neo-Classical St Thomas’ Cathedral, Fort, Mumbai celebrated its tercentenary with a festival of sacred music. To commemorate 300 years, four soirées treated the music loving audiences of Mumbai. September 28th started it all with an organ recital, followed by a concert of sacred music on October 2nd and a Service of Thanksgiving four days later. There was also a demonstration talk on the pipe organ at the National Centre for the Performing Arts on October 3rd for school children.

The highlight was the sacred music concert of October 2nd, when the choirmaster Ravi Joshua played St Thomas’ digital classical organ from the Netherlands and the Cathedral Festival Choir intoned compositions from Renaissance to contemporary musicians. Thomas Tallis’s (If Ye Love Me) and Giovanni Palestrina’s (Sicut Cervus) were the only two Renaissance composers presented prior to the building of the early 18th Century Cathedral. 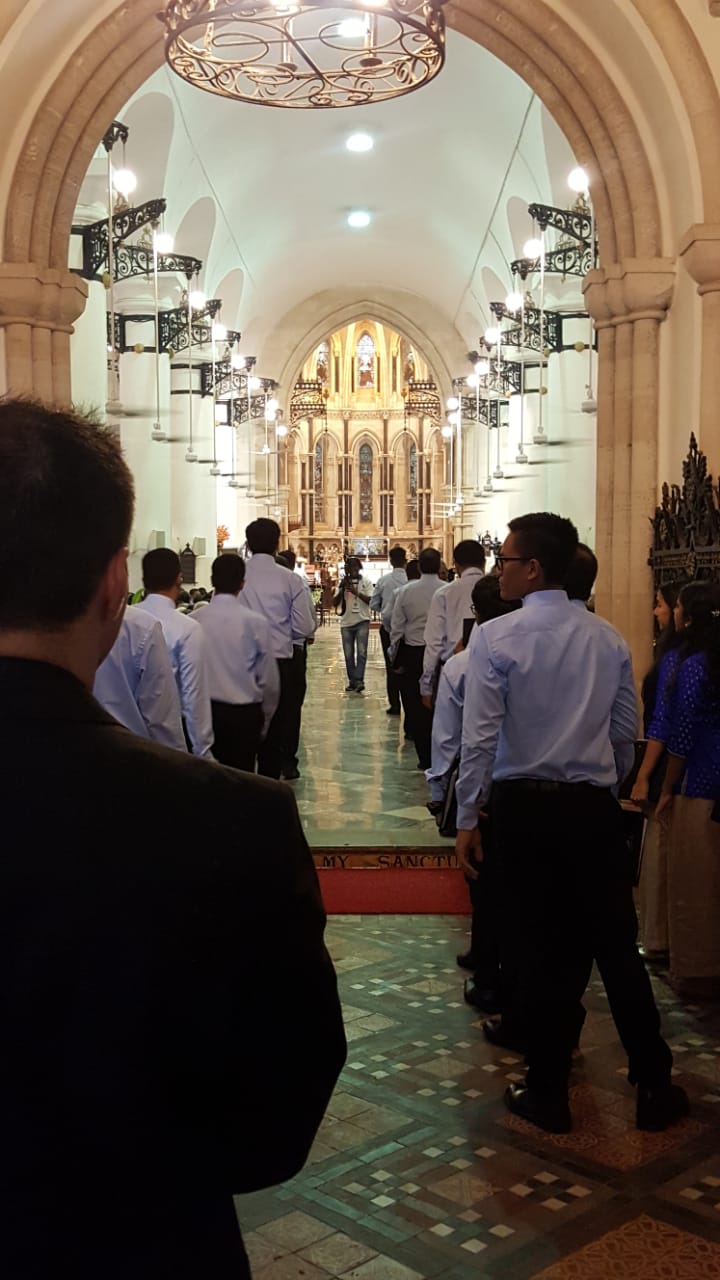 The two contemporary composers of St. Thomas’ were Johann Sebastian Bach and Josef Haydn. Both were represented with – Wir eilen mit schwachen and Jesu bleibet meine freude (Cantata 147) by Bach and a chorus from Handel’s oratorio – Hallelujah, Amen from Judas Maccabeus.

Composers of the later period – Josef Haydn’s The Heavens are Telling from the oratorio The Creation, Wolfgang Mozart’s Laudate Dominum, Anton Bruckner’s Locus Iste and Charles Stanford’s Te Deum in B flat were warmly received. Four hymns were sung with the congregation joining in. As this October 2, was Mahatma Gandhi’s 150th birth anniversary, his favourite hymn Abide With Me was sung in four parts. Modern compositions were Magdalene Cease from Sobs and Sighs – a German Easter carol arranged by Peter Hurford; I sing of a Maiden by Lennox Berkeley and A Clare Benediction by John Rutter were contemporary instances of modern sacred music.

The Cathedral Festival Chorus was put together for the occasion, comprising of The Cathedral Choir, joined by six other choirs dotted across the city to conserve the aural tradition of hymns and sacred music. The balanced choir of 40 voices opened with the Gregorian chant Salve Regina. The choirmaster Ravi trained the mélange of choirs before the guest conductor Joshua Anand Slater took over the directing for the concert on October 2. On the final day Ravi juggled between the piano and the organ as Joshua stood at the podium giving the choir the pulse of each piece tapping his sternum unobtrusively as each item was being introduced from a podium. The Symphony Orchestra of India loaned a string ensemble of two violins, a viola, cellist and double bass. A trumpet and clarinet breathed life into the evening.

The apse with original stained glass at the Cathedral was a befitting background to the 300 year-old Cathedral which houses well-polished teak armed chairs of yore. Two of these bear a plaque stating King George V and Queen Mary had occupied them on their visit to Mumbai (then Bombay) in 1911. That year marks the laying of the foundation stone of the Gateway of India to commemorate their royal landing. The water fountain has also been restored and spouts water after 25 drought years. For this once-in-a-lifetime celebration, an anthem – Lord we Love the Place – had been commissioned. Christopher Gower, organist of Peterborough Cathedral in England who also composed for the Hong Kong Cathedral, put Psalm 26 to music. Both Dame Mary Tanner, who wrote the words and Gower extended themselves magnificently. This composition maximised on challenging crunchy chords with discords in its harmony. A Hymn texted by Sir Robert Grant – O Worship the King – was incorporated in The Service as he was Governor of Bombay, a patron of the theatre and music who lent his name till recently, to an arterial road in the city. This hymn’s descant was written by late Charles Velu, former organist of St Thomas’ and music master of Cathedral and John Connon School.

A devotional Marathi song was sung with accompanying tabla, flute and synthesizer by devotees from the Church of the Holy Redeemer, Dadar. The Indian Christian Marathi poet Narayan Vaman Tilak wote Deul Hridaya Hé Mazé (My Heart, God’s Temple) among 700 hymns contained in the Hymnal. Of these 254 are credited to Tilak.

Joshua, based in New York, was bowled over by Indian hospitality. He is a teacher and performer and free lances. The maiden performance of September 28, saw pieces by Bach, Felix Mendelssohn-Bartholdy and Johannes Brahms. Joshua performed two lesser known works composed by Brahms before his death at age 64. He ended with a tuneful Charles-Marie Widor (1844-1937) – Tocata 5 in F minor to showcase technological differences in an organ.

To enthuse and spread the love of classical music, a demonstration on the pipe organ at the NCPA was welcoming of all. Students attended this in full force and showed curiosity as they had neither seen nor heard a pipe organ before.

The festivity closed with the choristers walking down the three centuries old aisle which rang with Ode to Joy from Ludwig van Beethoven’s towering Ninth Symphony – heralding joy, peace and happiness.