Nikhil Sardana: What is the International Music & Arts Society? Tell us about its founder. What was the purpose and vision of setting up this organisation?

Urmila Devi Kotda Sangani: The International Music & Arts Society(IMAS) is a charitable, not-for-profit organisation founded in 1974 by my mother Rani Vijaya Devi Kotda-Sangani on the suggestion of her brother, the late Maharaja of Mysore, Sri Jayachamaraja Wadiyar. 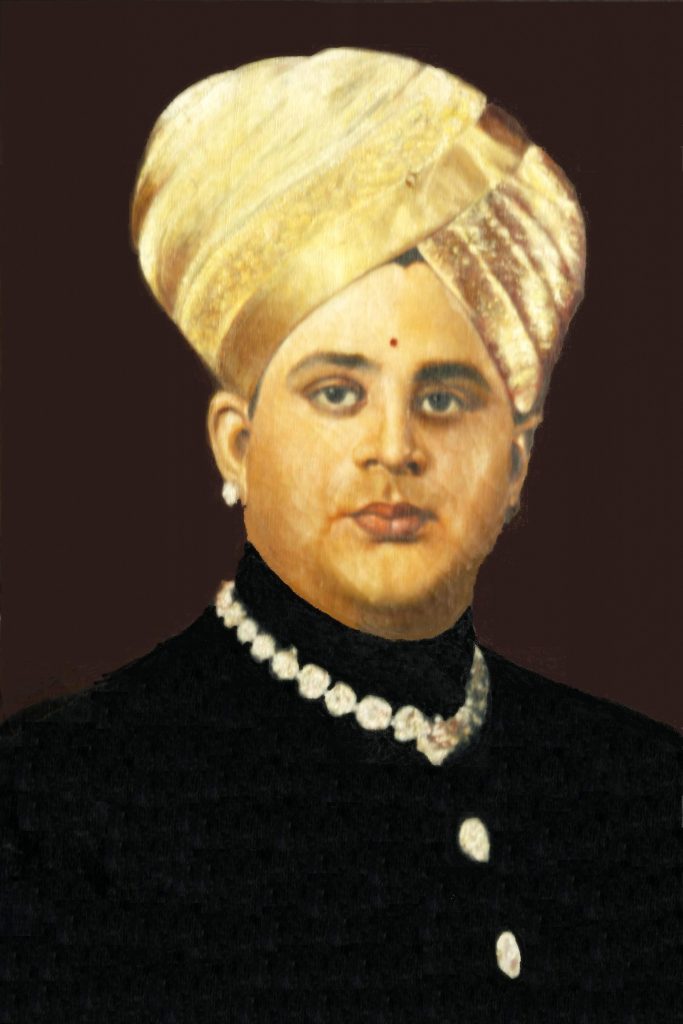 To sum up the vision and purpose of the IMAS in the words of Rani Vijaya Devi:

“To reach as wide a section of the community, to offer the best possible cultural shows, to make Bangalore a leading cultural centre and to foster goodwill and fellowship – these are some of the cherished aims of our society”

Rani Vijaya Devi with a group of good friends and distinguished enthusiasts of music and the arts formed the first committee of the Society. This is a voluntary but dedicated group that went about enlisting members and building up the fledgling institution with a sincerity and commitment that has marked its working ever since. Rani Vijaya Devi at her piano in the 60s © IMAS Archives

Rani Vijaya Devi and her brother were not just patrons of music but accomplished musicians and proficient performers, both in Western classical music and in Carnatic music.

Rani Vijaya Devi in an article she wrote many years ago on The Cultural Atmosphere of the Mysore Palace said that the cultural atmosphere prevailing in the Mysore Palace during her childhood(between 1920-1940) undoubtedly had a profound influence on them. Music formed an integral part of all family gatherings, celebrations of traditional Hindu festivals and palace functions. She said that thanks to these traditions, they were exposed to a cultural feast and were fortunate to hear many of the great Carnatic musicians like Sri Muthiah Bhagvatar, Venkatgiriappa, one of the leading Veena players and others. Many of the artistes taking part were not from the Mysore State. Ustad Faiyaz Khan and famous shehnai players from Baroda performed in the Palace in the Durbar hall which she said provided a beautiful setting. There was also a Western band and orchestra which gave performances during the Dasara Durbar, parades and other official functions.

My mother’s brother, the Maharaja, was a good student and Western classical music became a passion with him. He had a very large collection of records which my mother said gave them an opportunity to listen to many of the finest artistes. It must be remembered that there were very few concerts by well known musicians from Europe in India at the time. It was because of her brother’s interest that she and her sisters had the opportunity to listen to a good deal of music, and my mother said this was definitely how her interest in classical music was aroused. Later on, the Maharaja who had a great interest in the music of the Russian composers of the time, heard the music of Nicolai Medtner, a struggling Russian emigre composer living in London and generously funded the publication of some of his work. In gratitude, Medtner dedicated his 3rd Concerto to the Maharaja. The Maharaja was the first president of the Philharmonia Concert Society, London in 1948 and sponsored a series of Mysore Concerts in London. Copy of the programme sheets of some of the earliest concerts held at Royal Albert Hall on 13 April, 27 April – 11 May 1949 | Source: Wikimedia Commons Copy of the programme sheets of some of the earliest concerts held at Royal Albert Hall on 13 April, 27 April – 11 May 1949 | Source: Wikimedia Commons

Rani Vijaya Devi started studying the piano at the age of six in Mysore. She and her brother were taught in the palace by the nuns of the Good Shepherd Convent. The convent must be acknowledged as the pioneer of classical music teaching in the erstwhile Mysore state. The nuns were responsible for inculcating in them a lifelong love of music, and it speaks volumes for their contribution that they had three outstanding pupils in my mother, Rani Vijaya Devi, her brother the future Maharaja and Dr. Raja Ramanna, who also learnt the piano with them in the palace.

Later my mother passed the Fellowship examination of the Trinity College of Music London and studied for a year and a half with Dr. Alfred Mistowski, one of the examiners of Trinity College who had stayed on in Mysore. After her marriage to the Thakore Saheb of Kotda-Sangani who joined the Indian Foreign Service after Independence, they were posted in New York in the early fifties where she pursued her musical studies privately with the well known Polish Professor Eduard Steuermann of the Juilliard School of Music.

In the early sixties when my parents were posted in Hong Kong, my mother met an Italian pianist Annarosa Taddei, a student of Cortot, who was living there at the time. They became friends and started playing piano duets together. After developing their repertoire, they were invited to play several concerts in Hong Kong and also in India, including for the Poona Music Society and the Time and Talents Club in Bombay with great success. Their last concert together was in 1992 in Bangalore.

NS: How has the Society contributed towards the performing arts scene in Bangalore?

US: The International Music & Arts Society was inaugurated in September 1975 with a Bharatanatyam performance by celebrity danseuse and actress Vijayanthimala Bali. Among other programmes in its early years, it organised an exhibition of paintings by M. F. Husain, his first ever presentation in Bangalore. Rani Vijaya Devi greeting M.F. Husain at his exhibition for the society in the 70s. Mr.S.M. Krishna, Chief Guest looks on © IMAS Archives

For well over three decades the International Music & Arts Society has invited leading Indian and foreign artistes to perform before wide, appreciative audiences. This it has done both independently and in association with the Indian Council for Cultural Relations, various foreign embassies, the former USIS, Alliance Francaise, Max Mueller Bhavan and with corporates such as Titan Company, HSBC and Himatsingka Seide.

In the recent past, we hosted the 65 member Symphony Orchestra from Mumbai, and the Brigham Young University Contemporary Dance Theatre from the United States, both major programmes for which we were lucky enough to have Titan Company as our sponsors.

NS: Who currently heads the IMAS?

US: Of the original Founder members of the IMAS, only two remain on the Committee, Mrs. Ila Chandrasekhar, the current President who became the head after Rani Vijaya Devi passed away in 2005, and Mrs. Prema Bhaktavatsala, one of the Vice-Presidents, both of whom have provided guidance and stability and maintain the ethos of the IMAS, its commitment to excellence.

Urmila Devi with the two founder members Prema Bhakta, Vice President, and Ila Chandrasekhar, President, at the 35th Anniversary Concert by Prince Rama Varma of Travancore at the palace in Bangalore in 2010 © IMAS Archives

NS: What are your current responsibilities with the IMAS? Please share your background with us.

US: My role in the IMAS has been to take care of the day-to-day running of the Society, choose our programmes in consultation with the Committee and keep us relevant in the rapidly changing cultural scenario of present day Bangalore. An example of this last point was our 30th Anniversary programme. Just before my mother’s death in 2005, we celebrated our 30th Anniversary with a show of heritage textiles and a fashion show by designers with an aristocratic background – Muzaffar Ali, Raghavendra Rathore, Brigitte Singh and Srikantadatta Wadiyar of Mysore. Rajmata Gayatri Devi of Jaipur and the Maharaja and Maharani of Mysore were the Guests of Honour. This was a departure from our usual programmes but was both a fundraiser and an attempt to raise our profile and was a tremendous success.

While I was not a Founder member of the IMAS, I was privy to the early workings of the Society as the office ran from my mother’s house. I often helped with the correspondence and programmes, which gave me a valuable insight into the workings of the Society. I was inducted into the Committee sometime in its first year. It was learning process for all of us as none of the Committee members had any exposure to running a cultural organisation but we forged many important connections with other cultural organisation across the country and cooperated with embassies in presenting artistes. My mother’s music contacts cultivated over the years also helped greatly in presenting Western classical musicians. Since I was also working in the 80s my work experience helped me to be more organised and to work to deadlines, both helpful when dealing with the Society’s work. My BA in English Literature and interest in the arts were also useful.

US: It is difficult to assess the interest in Western classical music in India today without resorting to statistics from music schools in the country and attendance at concerts in various cities which is beyond my scope. Speaking for Bangalore, there seems to be a proliferation of music organisations presenting Western classical music and a number of schools which have made strides in teaching and have an ever growing number of students.

The Good Shepherd Convent established over 150 years ago in Bangalore was the pioneer of Classical music teaching. We have come a long way since then with many of the new International schools in the city including Western music in their curriculum in keeping with the climate of globalisation. Trinity College, ABRSM and the London School of Music have large numbers of students taking their exams. NS: What challenges do you face with the Society and what changes do you hope for in the near future?

US: One of the main challenges we face now is remaining relevant in a changing cultural scenario.  We have to strike a balance between culture and entertainment and compete with the plethora of events being offered today and the number of organisations offering them. We have a membership numbering over 400 and are on a constant membership drive.

Fund raising is also another great challenge. The Society does not receive any official grants. It has achieved such a range of activities by partnerships with co-sponsors such as foreign cultural centres, and with the generous support of corporate benefactors. Its major source of funding is through membership fees and donations.

The changes I hope for are more involvement in the Society by younger members. Towards this end a young and enthusiastic sub-committee has been formed with fresh ideas and with greater familiarity with social media which we hope to use more aggressively to realise our goal of promoting the arts.